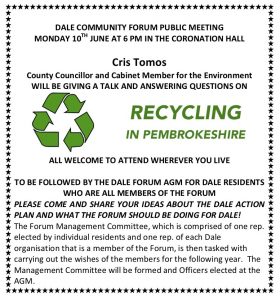 What is Dale Community Forum?

The Forum was formed after an open meeting in 2003 to which all residents were invited. The meeting was organised by PLANED. The purpose was to enable the community to become more organised and able to bring about changes of benefit to the village. The priorities set out in the Dale Action Plan were largely agreed at that meeting.

A great deal has been achieved since then – new footpaths, saving the walled garden, the old stables turned into a heritage centre, the hall modernised and enlarged and most importantly, the continuation of existing groups and the creation of new ones.

The General Management Committee was formed at that first meeting with an elected chair, treasurer and secretary plus a representative from each group. This committee meets four times a year to receive reports from the various groups and to discuss ways of assisting and supporting groups already formed or encouraging the planning of new groups. The officers are elected at the AGM to which a guest speaker is invited. Past speakers have included a representative of the Local Health Board, a manager from Milford Haven Tesco and an officer from Pembrokeshire Tourism.

Because the Forum is legally constituted and the officers elected by the community, it is recognised by outside funding bodies. As a result, newly formed groups, which have not had the opportunity to adopt their own constitution but belong to the Forum, have been able to apply for grants and these have been received by the Forum Treasurer and then distributed to the particular group as required. The largest grant received was the £279,000 grant for the Coronation Hall from the Welsh Government. Without the Forum it would be very difficult for a group, without its own constitution, to receive direct grant funding.

The Forum is a member of PAVS (Pembrokeshire Association of Voluntary Services) and thus ensures that all groups have access to this organisation without paying the full membership fee which would be costly for a new or very small group.

As all the groups in the village are represented it is easier for them to have solidarity on an issue which is controversial and perhaps a threat to village life e.g., the attempt to designate the area of sea around Dale as a Highly Protection Marine Conservation Zone which residents thought would have had a very deleterious effect on the life of the Community.

The Forum only exists to serve the groups represented on it; it is an enabler and not a group in itself and thus has no income. All its meetings are open to everyone and notice is given in Peninsula Papers.

Clerk to the Forum.