Teachers from Coastlands C.P. School are very proud of their pupils.  Last term nearly 20% of pupils achieved 100% attendance.  “We are absolutely delighted that so many children are achieving 100% attendance and hope that even more will work to improve their attendance this term.  Well done and keep it up!” . said Head Teacher, Mr Harries.  All the children who had 100% attendance received an attendance medal from Mr Harries in the end of  term assembly. 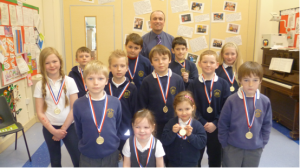 We are still very busy at Coastlands C.P. School!

On the 30th January, Class 3 started hockey with Mrs Scourfield who has been playing for 35 years. We had lots of fun doing this activity and pupils have asked for a school hockey team so we can play different schools. All the children in the school will have some hockey sessions – next will be Class 2 and then it will be Class 1.

Another thing we did on 30th January was play football & netball against St. Aidans. We won both matches of netball and lost 1 football game and the other one was a 0-0 game.

On the 31st January, 5 people went to Neyland to do a ‘Shrek Whodunit?’ Anna Thomas, Charlotte Llewellin, Milly Rees, Tom Beegan & Sam Phillips went in Milly’s mums’ car to Neyland. We had to then guess who stole the king’s money from far, far away.

All of the classes completed a Big Schools Bird watch at Shelia’s Peace. Some pupils saw a king fisher diving into a pond and a few gannets and a goose.

On 8th February, 5 pupils went to a SLADEN Swimming Competition. They got into the finals and enjoyed the day.

We had a special assembly on the 21st February when a lady from PLANED came in with Mrs Barkworth. The children had completed drawings, paintings and sketches for the St Ishmaels Community Action Plan. We had a competition and some were chosen to be put into the Plan. The winner was Sam Hawkins. Sam Burton, Megan Clarke, Polly Rees, Henry Richards, Maddie Beale and Anna Thomas were highly commended. All of these received a lovely framed certificate in a special assembly.

We had a lovely St David’s Day Assembly on 1st March. We had lots of competitions and certificates. Mrs Davies entered us into the Eisteddfod in lots of different competitions and some of our work is now going forward to the National Eisteddfod.

On the 8th March, Mr Harries took us to a girl’s football tournament. We didn’t win all our games but Mr Harries said that we played very well.

We also enjoyed taking part in the Dale Amateur Dramatics Society concert in Dale. We did a rap and performed lots of dances. Thank you Mrs. Thorpe for organising us so well!

During Fairtrade Fortnight, Coastlands C.P. School held a Fairtrade coffee morning. Homemade cakes, tea and coffee were sold by some of the children and over £80 was raised for school funds.  The event was organised by the school PTA and the newly formed Fairtrade Committee. 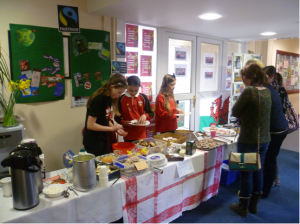 Coastlands C.P. School were delighted to represent their local area (the Pembroke region) in the Vocal Ensemble section at the Urdd County Eisteddfod at Ysgol Bro Gwaun in Fishguard last weekend.  It is the first time the school has competed at County level and they were pleased to secure third place.  Head Teacher Mr Paul Harries and teacher Mrs Wenda Davies who prepared the children for all Eisteddfod competitions were delighted with the children’s performances and were also proud of Year 6 pupil Anna Thomas, who gained third place in the Year 5 & 6 Solo at the regional Eisteddfod.  The school have also done very well in the County Urdd Art and Craft competitions with six first place pieces of artwork going on to compete in the National Eisteddfod in May. 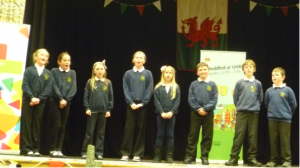