Following the storms we had towards the end of last year, many pebbles/rocks/stones were washed onto the grass verge in front of the haven beach. The council is arranging a clean-up day on Saturday 3rd March 2018 at 10am and we would like to invite you to come along and help in returning the pebbles/rocks/stones to the beach. Your time and assistance is greatly appreciated.

Dale Community Council along with the Coastlands Local History Group will be working together to tidy up the Hirano Maru memorial site. It has been decided to take this opportunity to also tidy up the Cemetery in general by getting rid of any overgrown ivy, brambles and weeds.
Please feel free to join in the clean up at Dale Cemetery Saturday 10th March at 10am.

Dale Community Council would like to thank you all in advance and we look forward to seeing you at the clean ups.

The Field Study Centre at Dale Fort will be running a series of Wildlife Watch events on the 2nd Saturday of each month from April through to October. Each event is around 2hrs in duration – here’s how the organiser describes it…

“The event is aimed at families and we will be introducing them to the microscopic life of plankton found in the seas just of the coast, as well as in the seaweed. We will be using the microscopes at the fort to look into pre-collected seawater and bits of seaweed and seeing how different (often outright bizarre) this life looks to the plants and animals that we are used to. I will also be talking about the various organisms that people find and (hopefully) getting people interested and aware of the microscopic world. Using microscopes allows people to look at some really cool and unusual animals that they would never otherwise be able to see.”

For more information have a look at this flier or contact the centre on 01646 636205 or via email ea.df@field.studies.council.org

The Gallery page has been updated with a selection of photos taken by children aged 7-8 in Class 2 of Coastlands CP School as part of the Triad project also involving children from Sageston and St.Florence CP Schools. The project required the children to take pictures in their local area then select and prepare the images for publication culminating in their appearance on this website. You can see the images on the Gallery page. Well done!

The road from Dale to Milford Haven is scheduled to be closed for telecommunications work to be carried out for 5 days starting from Wednesday 9th March. The road will be closed between 09:30am and 15:00pm. More details are available in this PDF document.

This is the Notice of Closure from Pembrokeshire County Council. The following map gives an alternative route (click to enlarge)… 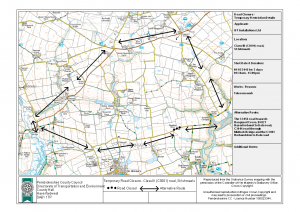 The area on the front at Dale known as Dale Roads is included as one of ten chosen sites to explore in Wales as possible Highly Protected Marine Conservation Zones. If established, this would have a major impact on the community and its economy – therefore you are urged to make your views known. For more information look at the notes below provided by Dale Community Council.

The Welsh Assembly Government is currently exploring the possibility of creating three or four sites to be HPMCZ’s. They have selected ten possible sites, throughout Wales, from which to choose the required three or four final preferred sites.

The area on the front at Dale known as Dale Roads is included as one of the ten chosen sites to explore.

Dale is a small coastal village with a fragile rural economy and relies heavily on tourism to sustain the community. The summer season is all important to the economy – our village shop has recently closed and the café has to close during the winter. Even the village pub is unable to open every day in the winter.

There are numerous diving and fishing trips based in the bay coupled with a small amount of commercial fishing. The pontoon is an attraction to visiting craft and a great source of pleasure to the many children holidaying in the village who use it for crabbing in addition to the blue flag beach. The village has some two hundred moorings, a sailing and windsurfing school and is a popular anchorage for yachts on passage. In addition the local yacht club runs a dinghy racing programme throughout the summer, as well as junior sail training and is the host club for national class championships. All these activities add to the attraction of the area for visitors and create job opportunities for residents.

Without these activities the village would be a less attractive place to visit and would struggle to remain a sustainable community – an objective clearly stated by the Welsh Assembly Government. The impact on the village could be enormous and may even cause the closure of Dale Fort if all the restrictions were applied.

It is very frustrating for us, as a Community Council, to have to use our limited resources to fight such a negative proposal. The consultation document merely explores one aspect of the area and gives no thought to the impact on residents and the economy of the area. If the Welsh Assembly Government has such a surplus of funds, we would certainly benefit from some positive help. It seems so illogical to name ten sites and use the limited resources of ten communities to fight these proposals when only three sites are required.